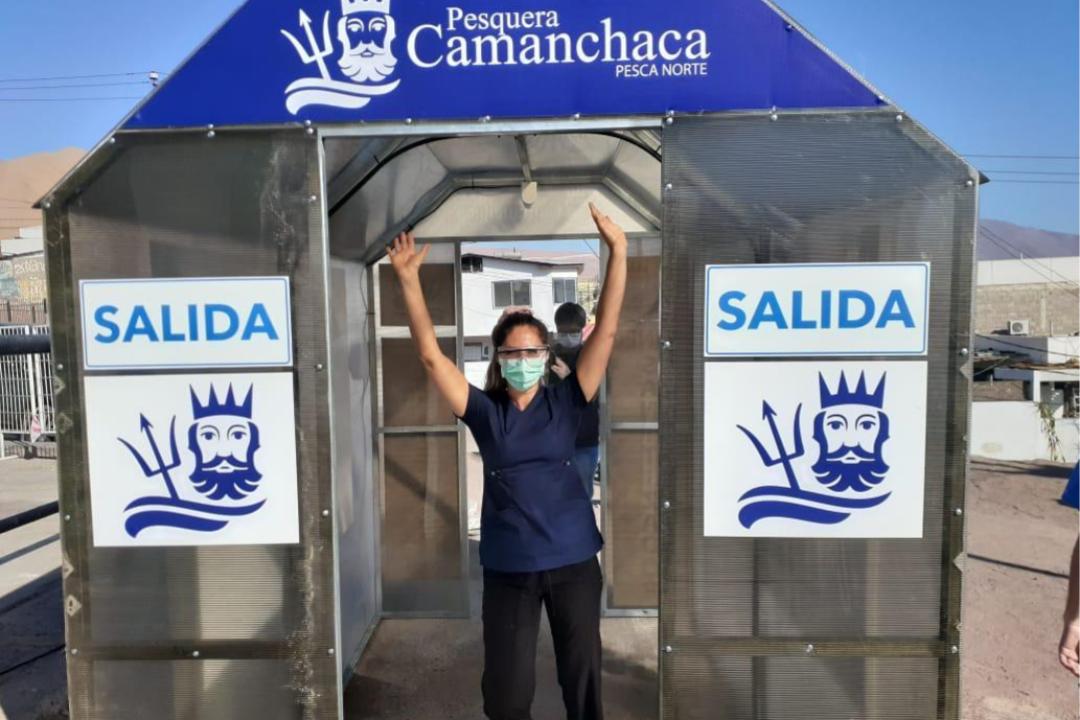 On this occasion, the company delivered three of the 16 total tunnels it will provide several institutions in Iquique in order to prevent the spread of COVID-19, particularly among health care workers.

Iquique, April 23, 2020.- At midday, Camanchaca delivered three disinfection tunnels for Iquique Regional Hospital. This is in addition to the four it delivered last week to Family Health Centers (Cesfam) in the municipality as the company seeks to prevent the spread of COVID-19, particularly among health care workers.

This brings the total disinfection tunnels that the Company has donated to health centers in the city of Iquique to seven, which complement the four provided to other public entities, like the investigative police, maritime authorities and two for the regional government. Another three tunnels have been set up to protect Camanchaca employees, for a total of 16 structures certified by the Institute of Public Health. Camanchaca will also cover the cost of the disinfectant for the tunnels, preventative monthly maintenance, tank cleaning and other costs during the public health crisis.

Adolfo Carvajal, Regional Manager at Camanchaca Pesca Norte, commented: “At Camanchaca, we have prioritized efforts to safeguard people’s health during the pandemic. That is why we have chosen to place these tunnels at seven health care facilities, including the family health centers and Iquique Regional Hospital. The idea is to prevent contagion among health care workers, who play a fundamental role in the city. We have decided to contribute to reducing the spread among our employees and in our community.”

The initiative is part of Camanchaca’s campaign to address the public health crisis, which includes a strict protocol at its operations and active participation in initiatives that benefit the communities where it operates.  Protocols include temperature checks for everyone who enters or exits the facilities; disinfecting common areas and employee transportation; reducing shifts to ensure distancing between employees on transportation, in the cafeteria and in plants. The preventative measures established by the Company and the Ministry of Health have also been widely publicized.

In addition to the tunnels it has installed in Iquique, the company maintains close ties through the Friendly Camanchaca program as it actively supports senior citizens in El Morro, a neighborhood in the northern area of the city, and sponsors Chilean government (SENAMA) assisted-living facilities. The company has also provided the regional government with disinfectant for its headquarters and the police station.

July 2021: During 2020 Salmones Camanchaca strengthened community work with its neighbors.

July 2021: “Our sustainability strategy and its five pillars is our roadmap.”

June 2021: Salmones Camanchaca publishes its seventh sustainability report, in which it reports on progress in its roadmap and its goals towards 2025